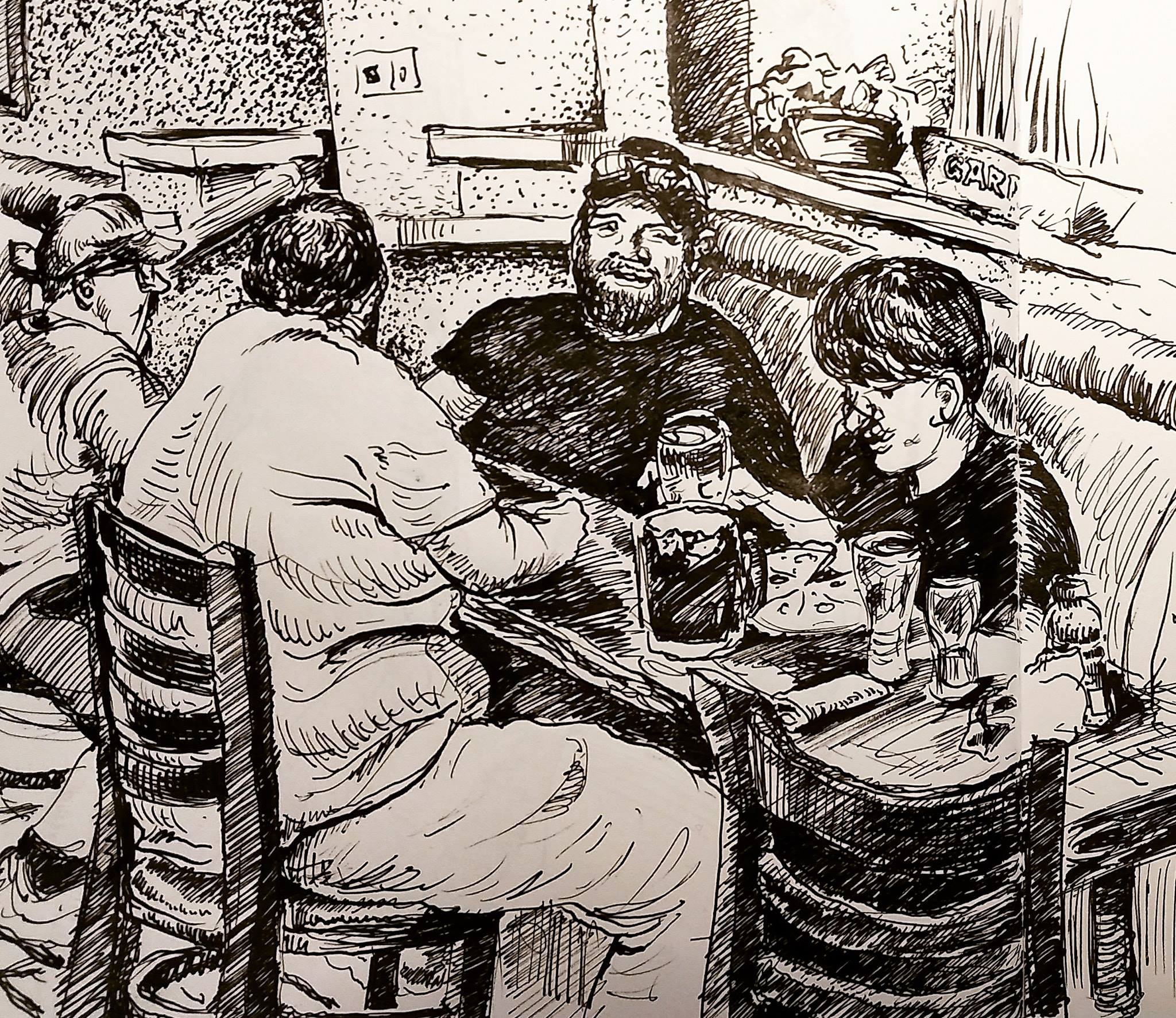 Dinner at Amelia’s in the Ramada Hotel is the best place to eavesdrop on trucker talk. The Ramada was my home during orientation at Prime Inc. and Amelia’s Bar and Grill is where I ate most every night. This Ramada is pretty unique for having business relationships with both Prime and an Asian travel agency. The clientele consists mostly of truckers and Chinese tourists. You can pick out any other demographic by their expressions, which seem to ask “how do I fit in?”.

The best way to unwind

After a hot day at the Prime terminal it was my habit to shower, have a cup of coffee in my room, then go have dinner at Amelia’s. After eating I’d stay at my table and unwind by drawing whatever was in front of me, or what I experienced that day. Drawing groups of people dining is fun and challenging. Food comes and goes, and while people eat they gesticulate and make small adjustments in how they sit and support themselves. In this way, groups are dynamic enough to make the drawing event feel like a hunt; like capturing prey. However, most people are stationary enough for long enough to also capture a good amount of detail.

I’ll divert for a moment to mention that Ramada pairs trucking students in rooms with double beds. Because of the changing nature of students’ training schedules, it is common to say goodbye to one roommate and get paired with a new one. This happens at least once during a student’s stay at the hotel. On this day, my then-roommate had left for TnT training and I got assigned a new room. When I arrived my new roommate was not there, but I discovered his luggage was ID’d with his name and phone number. I recognized it as a Las Vegas area code. I also noted that the A/C was set comfortably at 66℉. At this time in SLC, it was usually pretty close to 100℉ most days.

That night, I did my usual shower/coffee/dinner routine and chose to sit near a table of fellow trucker-trainees. I hadn’t met them yet, but I recognized them from one of the newer groups that had arrived since I’d been there. When drawing from life, I try hard to remain inconspicuous. I don’t want the people I’m drawing to start feeling self-conscious about how they look or what they talk about. This group of truckers seemed unaware of me.

Trucker talk and my new roommate

As I drew, I learned that the one with the beard in the black shirt had just met the one with the baseball cap sitting across from him, who was to be his TnT trainer. They were leaving the next morning. In addition to general trucking talk, they were sharing mutual knowledge of Las Vegas, both having lived there. Also, at the time, for a couple of days, Amelia’s dining room air conditioning wasn’t working so it was warm and stuffy. At a lull in their conversation, the bearded trucker in the black shirt said it was warm and that he was ready to get back to his room, where he set the AC to 66℉. I put two and two together and realized he was my new roommate. Turned out to be a really cool guy with an interesting past as a EMT tech.